What is a Trillion anyways? 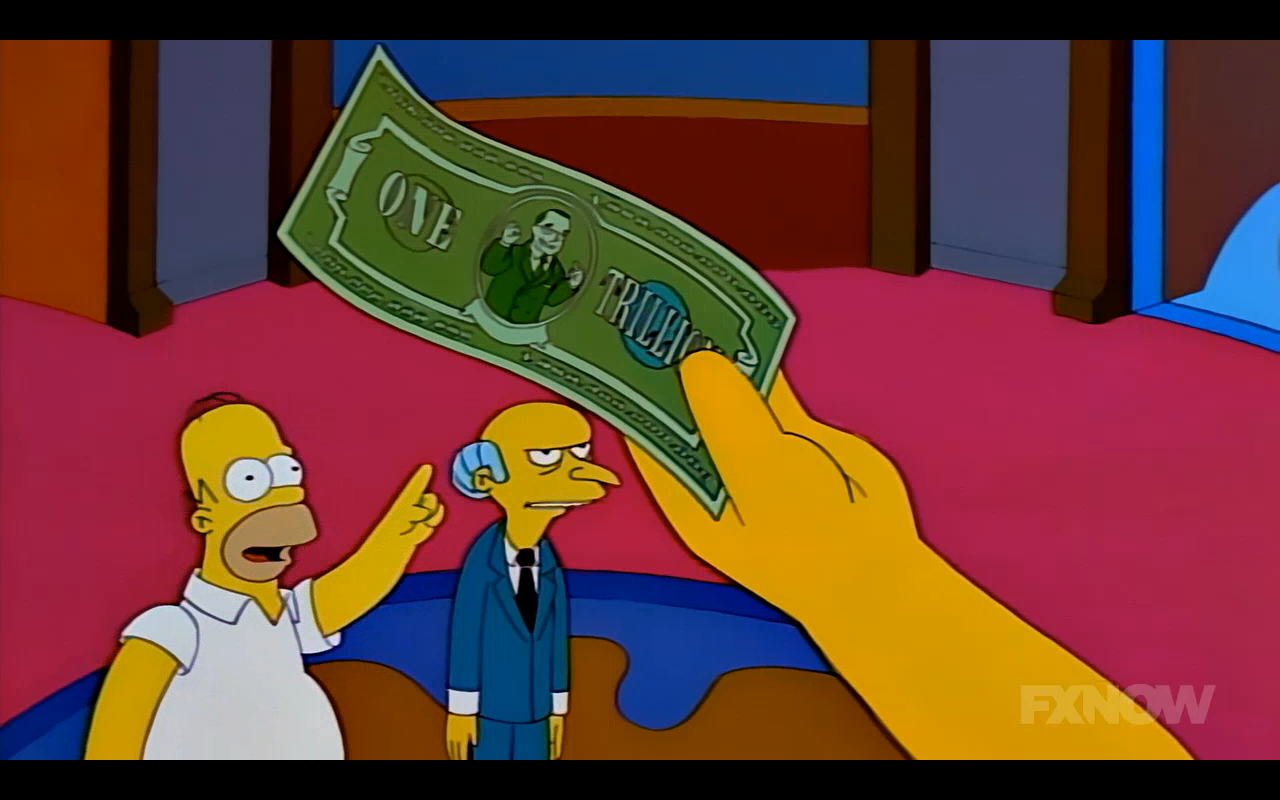 In a classic Simpsons’ episode, The Trouble with Trillions which aired April 5th 1998, Homer Simpson attempts to steal a trillion dollar bill from Monty Burns for the FBI. Monty Burns stole it from the US Government which issued it as aid to post WWII Europe. As an aside, the actual history of US post war aid to Europe was the Marshall plan, totaling 17B, although another 17B had already been issued between the end of WWII and the Marshall plan in 1948. Although, Zimbabwe actually issued a 100 trillion dollar note though 1 million dollar notes were common already.

These numbers produce laughs but honestly the concept of a trillion is hard to understand. One of my friends, Andrew, even said, “Most people don't even have a good concept of a million.” While another friend, Valora, passed on a great article written by Becky Mccray. I’ll quote Becky here, who is actually quoting her friend Pat Singleton:

Now let’s visualize that as a graph: 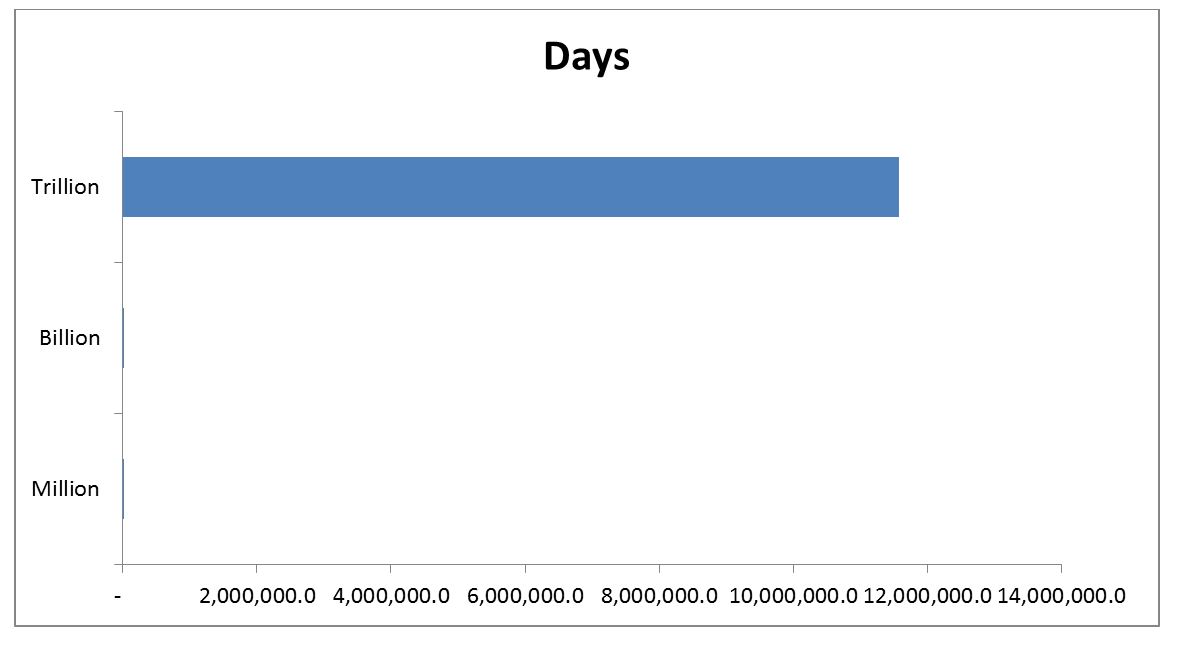 A trillion is such a large number that it is hard to even see a billion or a million – let alone the difference between the two. Still though, this analogy explains these large numbers in terms of time but what about dollars? I think it is an even vaguer and conceptually hard to understand large numbers when speaking about money.

With the debate for more stimulus going on, we have seen the Republicans ask for 1 Trillion and the Democrats were initially asking for 3 Trillion and have come down to 2 Trillion. Numerous economists, former Fed officials and finance professionals have asked for more stimulus. I think though that many people have a hard time understanding exactly what these large numbers mean. What is a trillion? How do you visualize it? For most of us, this amount of money is something far beyond anything we can actually fathom. It was not that long ago when TARP was created, and the 700 Billion dollar number was picked because it was “under a trillion.” Let’s not go there.

“Ryssdal: Is it true that $700 billion number basically you guys pulled out of thin air? Trillion would have been too much [politically]. Five hundred billion not quite enough?

Kashkari: Yes, we wanted as much authority as we could get because the one mistake we kept making throughout the crisis was we kept underestimating how severe it was. So we said we’re going to get one shot to go to Congress. We need as much authority as we can get. And ultimately it was his political judgment on how much he thought we could convince Congress to give us.”

There have been previous attempts to visualize a billion or a trillion that I have not found particularly enlightening. The best attempt at a trillion dollar visualization I’ve seen is an attempt to occupy the space it would physically take up if it was printed. Although, I think what really brings it home for people is the old story about how it is not worth it for Bill Gates to bend over to pick up a $100 bill. So why don’t we start there and continue our journey through trying to conceptualize and visualize a trillion dollars.

A Google search lists Bill Gates’ net worth today at $114 billion. Just to clarify, net worth is your total accumulated assets subtracting out anything where you owe money (loans, mortgages, deferred payments, lines of credit etc.). There is two ways to calculate this one in my opinion. One is to take working life and the other is to take actual life. Bill Gate’s is born on 10/28/1955. Using today’s date, this time means Bill has roughly been alive for 2,045,692,800 seconds. If we say it takes 5 seconds to pick up a $100 bill, Bill’s value for those 5 seconds is $278.63, meaning he loses $178.63 to pick up a free $100 bill. Now, if we recalculate this number with the assumption of Bill’s working life, the value of those 5 seconds sky rockets to $402.83. It is literally unimaginable to think that Bill Gates loses $302.83 in time value by picking up a free $100 bill. Let’s take a look at this again from the perspective of the current world’s richest man, Amazon founder & CEO, Jeff Bezos.

One of my friends, let’s call him Slash, points out just how long it would take a person to actually spend a trillion dollars. If Slash hosted a party that cost one million dollars on the first day of 1 AD and held such an expensive party every single day – who does he think he is?! Hugh Hefner?! – How much would he have spent of his trillion dollars today? The answer turns out surprisingly to be 737.3 billion! Welcome to the power of large numbers! Okay, this example, while fun, was if one person tried to spend it… what about if we look at the entire US population?

The US census gives the US Population in 2020 as 331,002,651. The total net worth of America is 104 trillion according to the Fed’s 2020 Q1 data. However, the Fed also helpfully breaks that down into different strata segments: Top 1%, Top 90 – 99%, Top 50-90% and Bottom 50%. If we look at just the bottom 50% net worth, that number is 1.497 trillion dollars! This number means if you took the Democratic proposal of 3 trillion dollars and spread it evenly among the bottom 50% of the US population that you would literally see their net worth triple. I hope that brings into perspective the magnitude of the number we are speaking of. However, how much money does this really mean per person? Well if one takes 50% of the 2020 Population, we get 165,501,326 people where we know the total net worth is 1.497 trillion. So that comes out to a net worth of $9,050 per person [caveat some people do have negative net worth and this math does not account for them]. Just for completeness sake:

While these specific strata lend some idea to what those kind of large numbers mean dispersed among the population, it still leaves us somewhat obscured on what this kind of large stimulus means writ large as well as how to understand the giant separations of wealth hidden within the variation of the 1% to .1%. McKinsey has already shown that on a percentage basis of GDP that this recession has already issued “total stimulus for the COVID-19 crisis already triple that for the entire 2008–09 recession.” 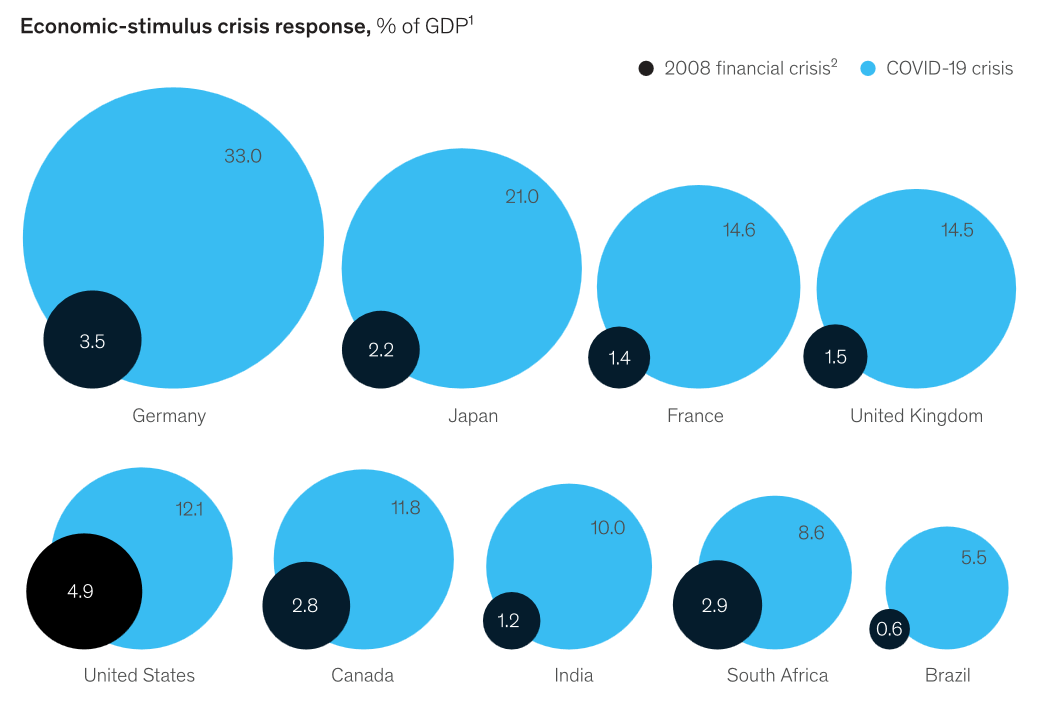 My goal now is to visualize in a few different ways large numbers that we are hearing all the time and probably familiar with already. 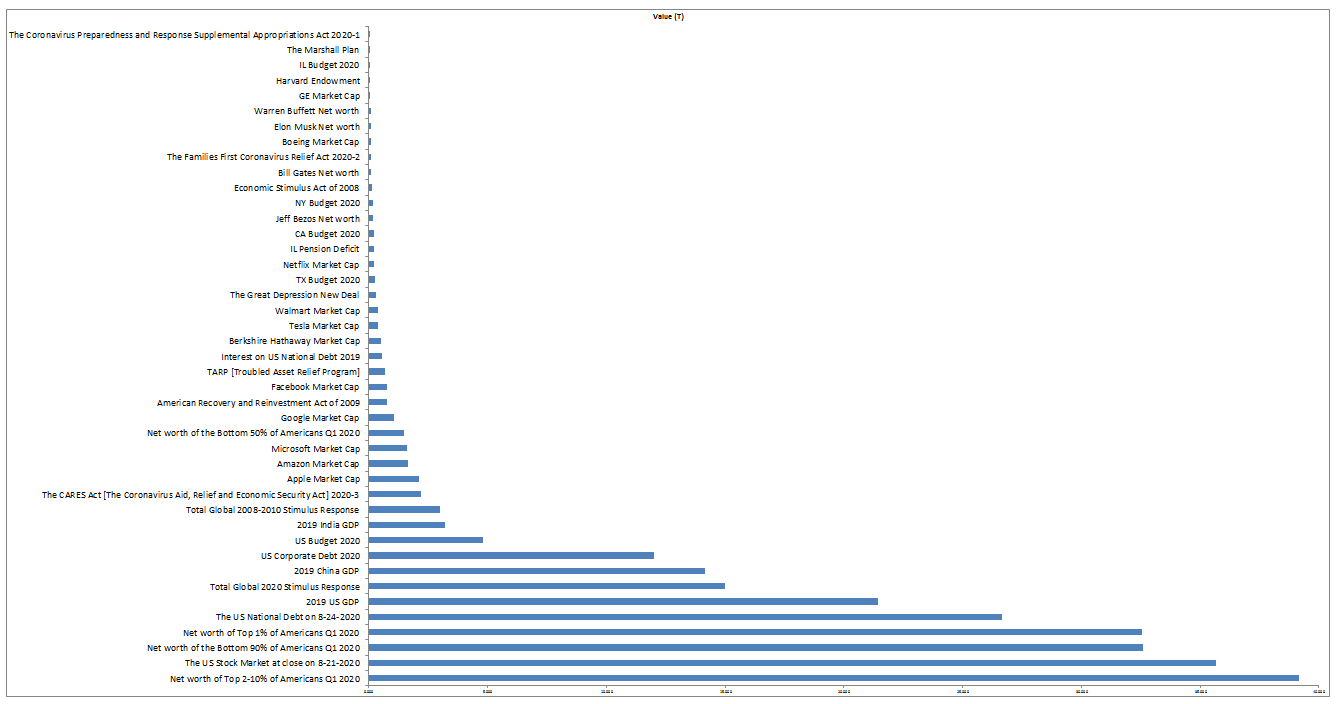 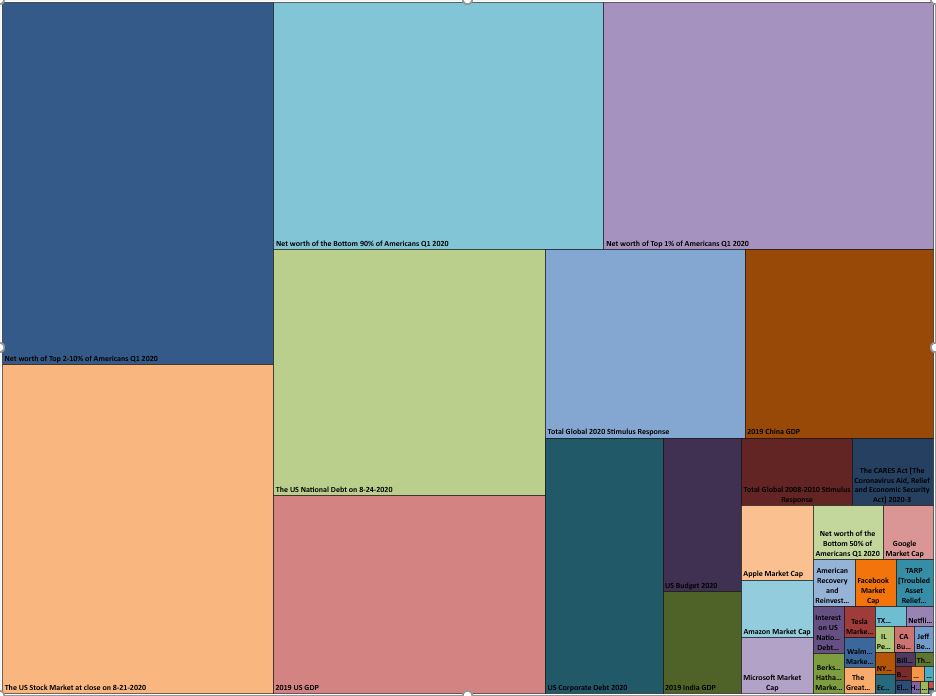 But what is the purchasing power of 1 trillion dollars? The median price of a home in the US is 317,000 dollars. With 1 trillion dollars, one could purchase 3,154,574 median priced homes outright without a mortgage loan. In fact, if you take the total amount of stimulus money that the US Government spent during the Great Depression, 323 Billion, and nominalize it to 2020 dollars; that figure comes out close to 6 Trillion – double the Democrat current proposal. Although, we have already issued 2.3123 Trillion in stimulus over 6 months while the Great Depression’s money was spent over 11 years. This observation brings forward another funny issue of time which is probably an argument best saved as an article for another time. So instead, I will leave you with this enjoyable classic Austin Powers’ clip dealing with large dollar amounts at specific periods in time.