The Maldives: The Chase for Tropical Paradise

“A master in the art of living draws no sharp distinction between his work and his play; his labor and his leisure; his mind and his body; his education and his recreation. He hardly knows which is which. He simply pursues his vision of excellence through whatever he is doing, and leaves others to determine whether he is working or playing. To himself, he always appears to be doing both.” – François-René de Chateaubriand

It was a full moon the night that I arrived to the island of Vaadhoo. As I took a stroll along the moon lit beaches… the only thought that came to my mind was: this island is alive. Hundreds of crabs of dozens of species scrambled out of my way as I walked. I had never seen such a healthy colony of crabs. The largest hermit crab I have ever seen crossed my path. The reason for choosing the island of Vaadhoo was the beaches were supposed to light up at night not from moonlight but from naturally illuminating water. The beach had not. The locals told me this goes with the cycles of the moon. I would say this was my first disappointment from the Maldives but in reality it was the second. The reasons you choose to go to places is often not the reason you fall in love with them. 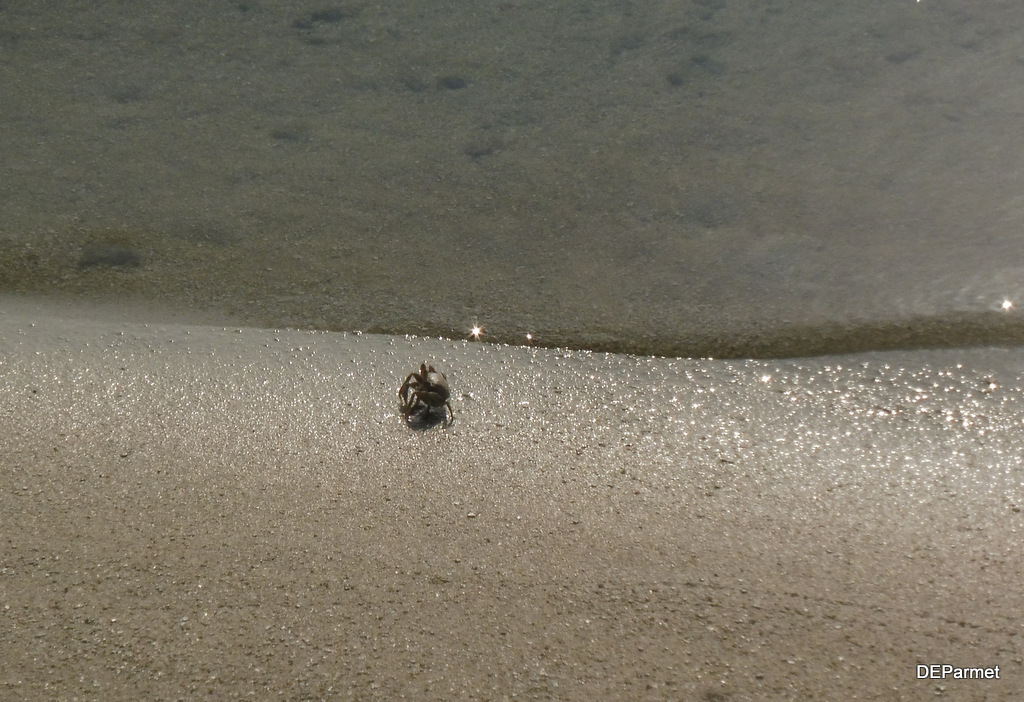 When researching the Maldives, I realized that wherever I went I would be guaranteed nice beaches and good snorkeling. Therefore, I set some rather strange priorities for this trip. I wanted to see the natural illuminating light and I wanted to get off the beaten path away from the standard tourist islands and resorts. In came Vaadhoo, nearly everything I read on the island guaranteed seeing the blue lights 100% of the time at night. Well, not surprisingly, this ended up being false. However, Vaadhoo, a part of the Raa Atoll, was quite off the beaten path. The only easy way to get there (aside from a sea taxi plane to Ifuru) was to take a four hour speedboat trip from Male.

I got up at 5am to take my ferry over to Male and catch my 7am speedboat to Vaadhoo. At 7am, I boarded the speedboat along with 20 other passengers and away we went. Around 8am, we heard a huge "crunch" followed by a crash and our engine died. We had hit a reef head on. I was shocked that the other passengers were all so calm as if nothing at all had happened. The captain did not need to take control of the situation because everyone was already waiting patiently! The captain and two crew members went to examine the engine. After about 15 minutes, the crew had the engine working at roughly half speed. They turned the boat around and headed towards Male. We arrived back to Male shortly after 11am. At this point, we were told there will be a new boat for us at 2pm to go to the Raa Atoll again.

While the snorkeling was quite good, it was quite hard to snorkeling in such shallow water. There were stingrays, a variety of fish and healthy coral. While I was snorkeling and following around a beautiful pipefish, I could hear commotion back at shore.

The commotion was getting louder and louder so I decided to it check out as I was about done snorkeling anyways with the sun ready to set soon. Two locals were shouting from shore that they needed help. I shouted back “with what?” “Our fishing line is stuck!”

As I was swam out with their line, I untangled it first from one reef then another; I started to think… how would a line get so tangled? This occurrence was certainly not normal for a simple fishing line. With the sun setting, it was starting to get hard to see and I was losing track of the line. I tugged on it a bit to see if it was still stuck and it went taut right away. I arrived to a very large reef head and saw it was tangled on this piece of dead brain coral. As I went to untangle it a huge shark, about 6 ft., swam right at my head! I punched it in the nose; it missed me by about an inch. I was surprised and swam away. I replayed what just happened in my head and realized the hook was in its mouth. The shark had circled the reef in order to re-tangle the line. I calmly went back to examine. Sure enough, the shark had wedged itself between two pieces of the reef and the line had been circled twice. I untangled the line and swam as fast as I could back. I told the locals their line was free, but they had a shark. They looked at me in disbelief.  I showed them pictures on the GoPro. They were shocked.

“Have you ever been so close?”

The three of us gave our best Herculean pulls and the line did not move an inch.

“He must have re-tangled it on the reef.” [Implied can you go back out there again?]

I curtly said, “I will go check” as I thought to myself, what am I doing?! Am I insane?! Yes, I want to be eaten by a shark today please.

Sure enough, the shark had made a mess of the line. It was smart because this time it had so thoroughly entangled the line that I had very few choices. I paused to think about my next step. I decided since the coral was dead anyways that probably I could free the line by breaking a few key pieces off at the right points. I enacted this plan and within seconds the line was free and so was the shark. I swam as fast as I could away. I put my head above water to shout, ‘the line is free and you still have the shark!’ Within moments, I was back on the beach and the locals were reeling in the shark.

“What were you attempting to catch?” I asked.

“Well shark is what is for dinner!”

The locals laughed heartily. “We don’t actually want him. We call this shark the sleeper shark. It usually just sits and sleeps all day.”

“It is not sleeping now!”

“What did you want then?”

Unbelievable! I risked my life for the two locals to retrieve their fishing hook?!

As I stood and watched them pretty helplessly figure out how they were going to get the hook out of a live shark’s mouth for a while before bidding them good evening. Normally, Nurse sharks are not dangerous and I am happy to report despite my initial shock that this story ended quite peacefully with the shark being freed back to the ocean as well.

While normally, I will not data dump a country; in this case, I am going to make an exception because finding reliable information on the Maldives is quite difficult. Coming soon, see part 2 if you are interested in coming here.