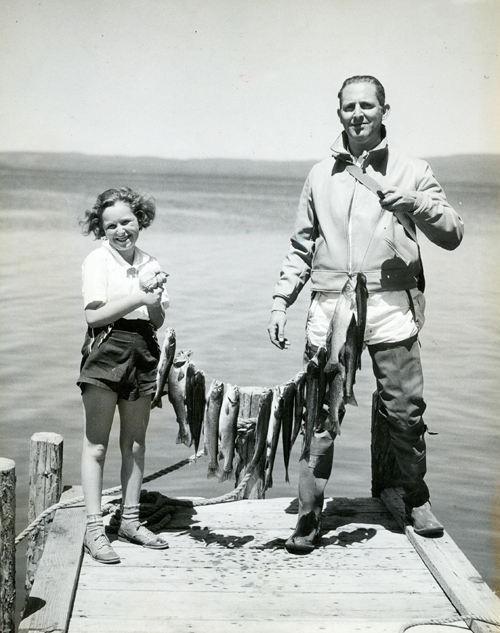 It has been a year since my Grandmother passed away. She instilled in me a love of travel and the unknown and the bravery to actually do it. I find myself often quoting my grandmother these days. I think of her often when I travel. Today epic travel adventures have become much easier due to technology, the advancement of English skills and other things. In her day? She traveled old school. I remember getting my first travel tips from her like, “bring old stuff you know you want to get rid of and is near the end of its life… at some point during the trip, let go of it.”

This picture of her is from 1935 in Yellowstone National Park!

This picture has a story all of its own. That is my grandmother with my great grandfather back when fishing was still LEGAL in Yellowstone! David, Chief of Communications for the National Park Service contacted our family with this message about 8 years ago,

“Attached is a scan of an old photograph of Melvin H. Schlesinger and, I believe, your mother Elaine Schlesinger Wolf. Here’s the caption from the back of the photo: Melvin H. Schlesinger, Denver business man connected with Golden Eagle stores, and his daughter, with string of trout caught on Stevenson Island, Yellowstone National Park, 1935.

An explanation is in order.

While cleaning out some old files here at the office, I came across a box of photographs from the 1920s and 1930s.  Back in the early days of the National Park Service we provided photos of national parks to newspapers across the country for stories.  Most of these photos were beautiful scenery, but some included pictures of tourists have a good time.

The picture of your mother and grandfather seemed too wonderful to keep in a file here in Washington, DC and I can’t bear the thought of throwing it away.  So, last weekend at home I started searching the internet for your grandfather.  My efforts lead me to his daughter Elaine, and a profile on the Sarah Lawrence College website.”

Thank you David! This photo is now proudly printed and sits in my home.

Here is the obituary that I wrote about her:

This photo was taken by me on her 80th birthday. I really wanted to be back in April for her 90th birthday. As I was leaving for the wedding reception of my two friends (my last day in Delhi), I received a terrible email from my parents. She was not likely to make it to her birthday. In fact, she was not likely to make it through the next three weeks. I attempted to compose myself for the party; to not be a downer, as one friend said to me when his grandmother died, "dance the night away for her." I did dance, but the emotions would not allow it for long. Still, I was in good company and as you can see from the wedding photos, I managed to enjoy myself somehow. I guess that is how it goes - in cycles. A new love is celebrated and two families joined together as another flame fades.

I know many strong women - but none quite as strong as my grandma. She was always a great role model; she was wise, patient, well-traveled and giving. I will tell stories about my grandma for years. And in the end, I will remember; so she is never truly gone.
No one has ever been as supportive of my decisions as my grandma. When my I quit my job, my grandma said, “what you did is brave. You have courage for accepting the unknown.” She was proud.

When I saw her last Thanksgiving, she was no less proud. I showed her my photos from Croatia and we swapped travel stories. Then she said to me, "Danny, you are brave. Fear can crush a person just as easily on their own street corner of their hometown as it can in a foreign country. But you don't have that fear." She is right. I don't and neither did she. She was always brave and has been that role model for me all these years.